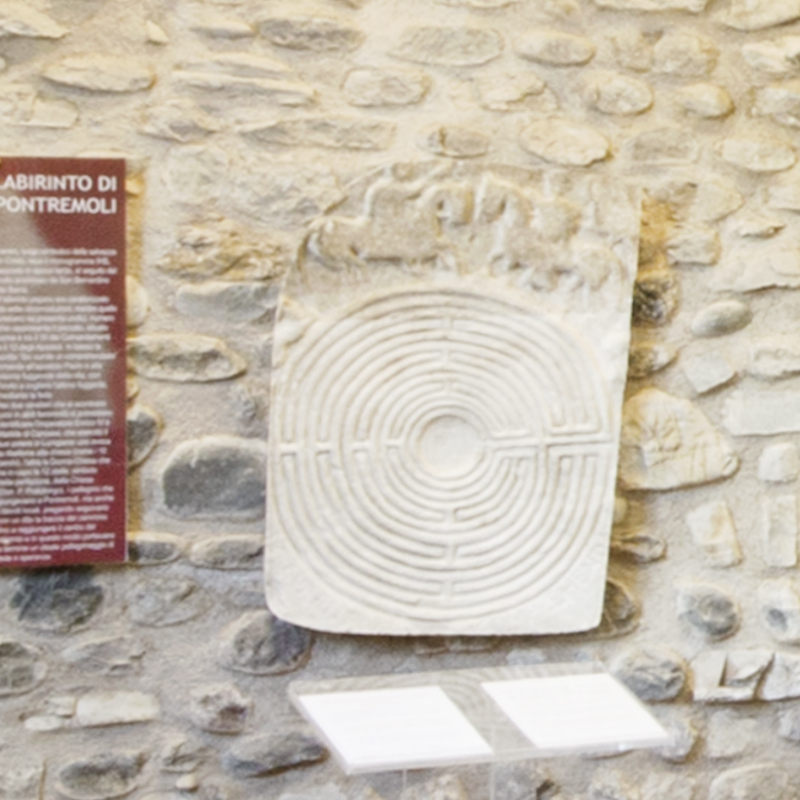 The church of St. Peter in Pontremoli hosts the original of this Mediaeval labyrinth made from sandstone. It is a Christian replica of a symbol which dates back to 5,000 years ago and was known by all civilizations. In the Middle Ages, Christian culture turned the Greek myth of the Minotaur, with Theseus caught in the labyrinth and Arianna who helps him find his way out thanks to her string, into an instrument of reflection on the human condition, on the eternal fight between good and evil, on the way to salvation which is now shown by the strength of Faith and the mystery of the Cross.

A close observation of the labyrinth shows that the concentric circles are along the axes of a Cross. In the centre of the Cross, the symbolical lieu of Christian salvation, there are the letters HIS which were added at alater stage following the cult promoted by St. Bernardino from Siena.
The pagan labyrinth was characterizedby seven convolutions while the Christian labyrinth has eleven, a number which is a symbol for sin as it stands between the 10 Commandments and the 12 Apostles.
The writing Sic currite ut comprehendis in the lower part is a reference to the apostle Paul and to the fleeting vision of life, and is an invitation to seize the day through
faith. The two fighting knights (one of them clad in female clothes) might represent emperor Henry IV and Matilda of Canossa who ruled over Lunigiana. One stands for rebellion against the Church (represented by 10 circles), while the other stands for the Woman-Church wearing 12 stars on her head as a symbol of perfection and of the Church. (Don P. Pratolongo). The pilgrims who arrived to Pontremoli, as well as the local faithful, used to follow the path with their fingers while praying until they reached the centre of the labyrinth thus completing an ideal pilgrimage of faith and hope.